[introduction to collection]: with the continuous growth of the coin collection team, the coin collection market is very popular. The currency trading market dominated by mechanism currency is quietly heating up and glittering in the market. Copper coins are a large collection of coins. Different versions of copper coins have their unique flavor, which is worthy of careful taste by antique collectors.

There are ten double-sided flags on the commemorative coin of the founding of the Republic of China. The 18 star flag on the front intersects with the five-color flag, which reflects the social background and characteristics of the times. The position of the two flags is surrounded by four traditional characters of "the Republic of China", and the bottom is five traditional characters of "Founding commemorative coins". The font is firm and powerful, and the frame structure is ingenious and appropriate. It is a rare calligraphy. There is a flower decoration on the left and right sides.

There are two flags on the back of the commemorative coin, which are decorated in English and Chinese. The inner ring is evenly arranged with convex points to form a beautiful bead ring. There is a "cross" on the upper end of the bead ring, and the following is Jiahe figure and leaf shape. The bead ring is surrounded by English, with "Republic of China" and "tencash" (Republic of China) in the middle There are six flowers in the middle of the two sections. The whole coin has regular shape and fine production. Although it has been washed for a long time, the surface of the coin is well preserved, the product appearance is good, the paste is natural and rare. It has unspeakable value and is worth cherishing. 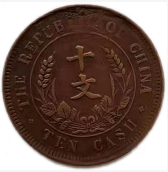 After the victory of the 1911 Revolution, the Qing emperor abdicated and the Republic of China was established. Sun Yat Sen, the pioneer of China's democratic revolution, put forward "issuing a new model and casting commemorative coins" in the presidential decree. Subsequently, Wuchang and Nanjing mints took the lead in casting copper coins for the Republic of China, mainly in ten languages, and issued throughout the country to replace the copper coins of the Qing Dynasty. In 1914, the copper coin was officially renamed "copper coin". Later, there was chaos in domestic copper coins, and the regional division made the circulation of copper coins obviously regionalized. There are many kinds of copper coins in the Qing Dynasty and the Republic of China, and there are also large denomination copper coins in some areas. In the following years, the warlords gradually declined, and the Kuomintang government began to unify the monetary system to control finance. At this time, the Kuomintang government mainly issued paper money, and copper money was gradually replaced by nickel money. On the eve of liberation, Guizhou and Suiyuan also issued local copper coins, but this was only a flash in the pan. At this time, copper coins had completed a short course and gradually withdrew from the circulation field.

Copper coins occupy an important position in the history of coins. It has been issued and circulated in China for only half a century, which is a very short moment in the long monetary history. However, it has witnessed the historical process of China's evolution from feudal society to semi feudal and semi colonial society. It is an important part of China's modern monetary history and moneology, and has unique historical significance. Nowadays, these double-sided flag coins are quietly warming up in the trading market of the Republic of China. They are favored by Tibetan friends and have become the focus of many antique collections. The prospect is bright.